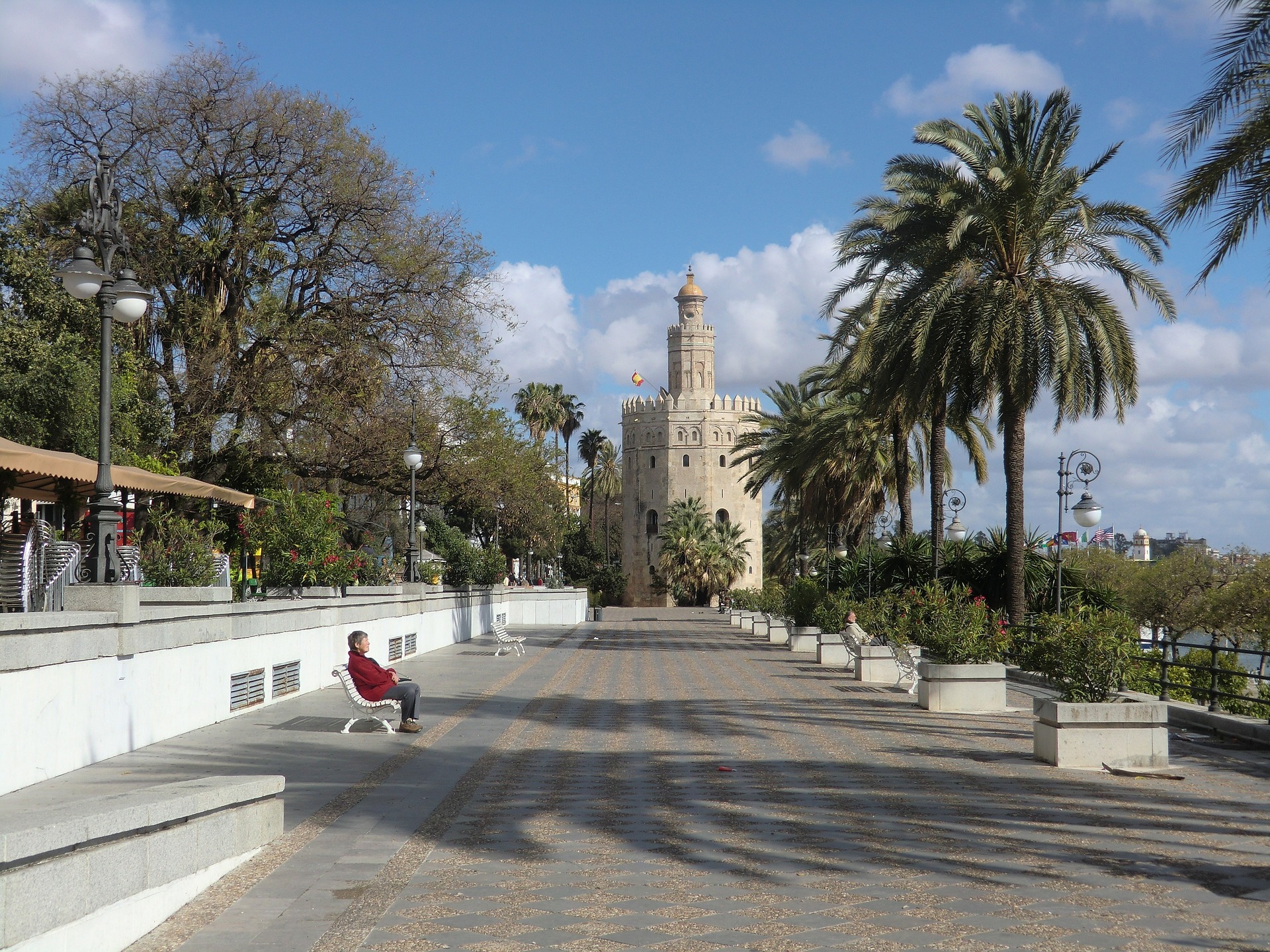 Sevilla, the Andalucian capital, is as Spanish as Spain gets. This is a city where you can still wander the labyrinthine alleys and find flamenco spilling out of the bars. A city where you can sit in ancient squares perfumed with the fresh blossom of orange trees. This is the place where many claim that the dishes known as tapas originated, and a wise Spaniard once advised me, as I wondered deliriously in the midday heat,  that stopping regularly for beer and tapas was the only sensible way to handle the heat.

This makes sense in what is reputed to be the hottest city in Europe, so I am here to help you do just that! Join me on an evening tapas tour of this sun-drenched Spanish city, and I can assure you that this fantastic place will be lingering on your tastebuds for longer than you can imagine.

The tour starts in the neighbourhood of the Macarena. This is not the overpriced, overcrowded, and overheated tourist centre, but the traditional Catholic neighbourhood. An intensely religious place where there are churches on every street, and the streets ring with only Spanish voices.

Our first stop is just off the Alameda.  This is a huge public square to the North of the city centre, lined with white poplars and packed to the rafters with the hippest folk of Seville. This modern day hipster hub is a nightlife centre, and plays host to many bars and tapas restaurants. Of which my favourite is Duo Tapas.

Nestled in the Northwest corner, Duo offers a jostling interior and tables that spill out onto the streets during the kinder months of the year. Here you can enjoy a variety of traditional tapas, many of which are served up with an inventive twist. Make sure to try the risotto!

However, a word of warning: Don’t rock up at 7pm and expect to get fed. The Sevillanos eat late. A siesta is taken after lunch, and then a few hours more work before dinner. This makes it around 9pm before you can even contemplate eating.  The great thing about this is that as the heat of the day dies away, the streets of the city come to life. So adjust to the Southern Spanish rhythm of life and set your internal clock a few hours late.

From the bustle of Duo,  wander down through the Alameda through the alleys to the oldest bar in Seville: El Rinconcillo. This ancient drinking house, lodged firmly in a street corner, is over 340 years old. Built at a time when Spain’s rule stretched over Europe and Latin American, including countries like the Netherlands and the territories of Latin America. This was a period of flourishing for Seville, and the city bloomed as Wealth poured in from ships returning from the new world. You can see this most clearly at the ‘torre del oro’ on the river banks of the Guadalquivir, a symbol of the wealth of the new world.

The jamon hanging on the walls of this bar however, is not 340 years old, even though it might look it! But don’t let a Sevillano hear me say that! Iberian ham is the pride of the city, and here is the perfect place to try it. You could always wash it down with a glass of manzanilla sherry I suppose, but personally I would opt for a nice plate of ‘espinacas con garbanzos’, or ‘spinach with chickpeas’. This creamy stew was once eaten by shepherds during chilly winter months.

Once you have filled your plate, you could either wander back up to the Alameda, where I recommend Café Piola for its excellent tarte de chocolate, or pay a visit to the ice cream shop. The gelato at Helados Rayas is heavenly. Pick up a scoop, I recommend the cheesecake variety, and then wonder down to investigate Las Setas, or ‘the mushrooms’ , a massive raised public plaza, before stumbling back to your hotel/

Note on Spanish spoken in Seville:

Andalusian Spanish is close to some Latin American dialects, and I personally found it quite difficult to understand. This dialect is spoken quite quickly, and they have a habit of swallowing some of the letters, making strange shortenings, and generally talking in such a spirited fashion that you might be left confused. Make sure you know a few key phrases, like how to get the bill ‘la cuenta’, order a beer ‘ una cerveza’ and say please ‘porfa’ or thank you ‘ muchas gracias’!